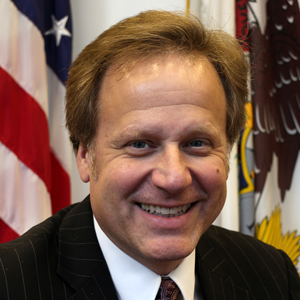 Scott is currently a member of the Energy, Resources and Environment Committee for the National Association of Regulatory Utility Commissioners (NARUC) and of the Task Force on Environmental Regulation.

Prior to his appointment Scott served as director of the Illinois Environmental Protection Agency from 2005 to 2011. During those years he chaired the Illinois Governor’s Climate Change and Advisory Committee and was a member of the Midwestern Governors’ Association panel charged with developing a regional cap-and-trade system. He was a member of the Air Committee for Environmental Council of States (ECOS) and the USEPA Environmental Financial Advisory Board. He is on a number of boards and committees, including serving as chair of The Climate Registry Board of Directors and co-chair of the Keystone Foundation Energy Board.

He was elected and served as mayor of Rockford, Illinois from 2001 to 2005. As mayor he held leadership positions in the Illinois Municipal League, United States Conference of Mayors and the national League of Cities. He also served as president of the Illinois Chapter of the National Brownfield Association.

Scott was elected a state representative from the 67th district in 1995 and served in the General Assembly until 2001 when he became mayor. Scott also served the city as city attorney.

Scott is married to Tammy Scott.